Thermoblock TM "Valkyria" - the basis of the construction technology "Termodom"

Termoblok appeared in Ukraine after 1995, but became widely used only with the mass extension of the use of construction technology "Termodom". Theoretically, the term can include all the wall units made of materials with high thermal insulation characteristics. However, in the CIS, the term "Thermoblock" means only wall blocks of polystyrene foam, which is the main element of construction using "Termodom" technology.

The assortment of permanent polystyrene formwork blocks for the construction of load-bearing walls includes both positions already known in the market and those produced exclusively by "Valkyriа". 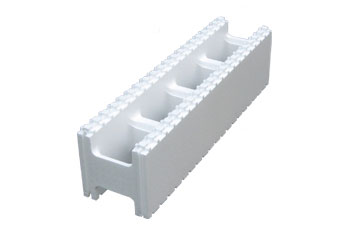 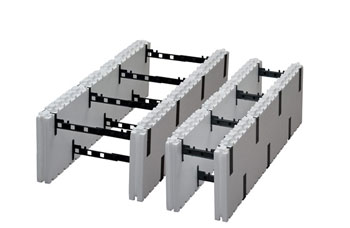 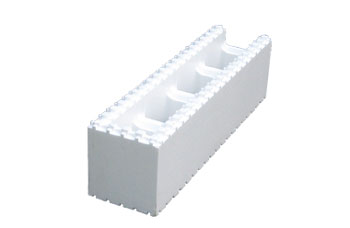 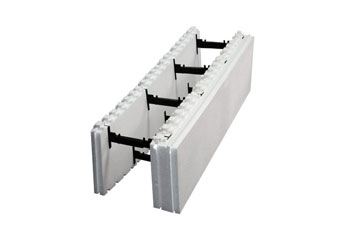 Our customers should take note of the special marking with our details on the block, as well as require a dealer's certificate from the seller (in case of purchasing blocks not in the office of Valkyria LLC). This is due to the increasing number of cases of falsification of our products.

Production of "Valkyria" is patented, therefore, similar products offered by other entities and individuals may not meet all requirements and be counterfeit.

Thermoblock is a hollow polystyrene block, consisting of two polystyrene boards, connected to each other by a plastic or the same polystyrene foam lintel. Such blocks are made usually from expanded polystyrene EPS, which is added flame retardant additives, which prevent further development of the combustion process (self-extinguishing occurs in 2-3 seconds).

The density of this material is 25-35kg/m3. Polystyrene foam EPS as wall material has such characteristics as environmental friendliness, cost-effectiveness, a wide range of applications in the architectural and design component, the low weight, unique insulating properties.

The dimensions of a standard thermoblock in Ukraine are: 1000х250х250 mm. The wall thickness of such block is 50 mm, inside width between the walls - 150 mm. In 2007 the "Valkyria" company offered the customer its own know-how: "a collapsible thermoblock with variable width".

The collapsible block is a novelty for the market of Ukraine. It consists of two polystyrene foam walls (50mm each) connected with each other by adjustable polypropylene (plastic) lintels. Due to its unique design, namely, a small cross section of the lintels, 100% monolithic walls, which makes it more durable. An adjustable lintel gives the possibility of changing the thickness of the load-bearing (concrete) part of the wall within the range from 100 mm to 450 mm.

The novelty significantly expands the range of applications of expanded polystyrene permanent formwork, from use in the construction of basement floors and foundations to increase the height of buildings constructed using "Termodom" technology.

All products have the necessary regulatory and documentary evidence of high quality thermoblocks TM "Valkyria".

Our customers should pay attention to the special marking with our details on the block, as well as require a dealer's certificate from the seller (in case of purchasing blocks not in the office of Valkyrie). This is due to the increasing number of cases of falsification of our products.

Valkyriа's products are patented, therefore, similar products offered by other companies and individuals may not meet the necessary quality characteristics and be counterfeit.